The Quiet Ones are an Irish traditional music duo. They are Patrick Egan (concertina) and Nicola Stathers (uilleann pipes). Patrick comes from County Wicklow in Ireland. He began playing the Concertina when he was seven years old. Nicola comes from California and started to play Irish music and uilleann pipes when she was twelve. Together they have performed all over the world, from their most recent home bases in Washington DC, Cork and London town, to trips that took them as far as Athens, Greece and British Columbia, Canada. They weave a mix of their love for Irish music, lore, language, dancing to bring a wide range of musical styles to their performances.

Joining them will be long time collaborators Vince Keehan and Cormac Gannon, members of San Francisco's infamous band, The Gas Men. Vince is a renowned musician, singer and songwriter in the Irish music scene in San Francisco. Originally from Galway, Ireland, he made an album there called "Nights in Shanaglish" with Patrick. Cormac comes from Mayo, is a mult-instrumentalist and recently released an excellent album, "Different". 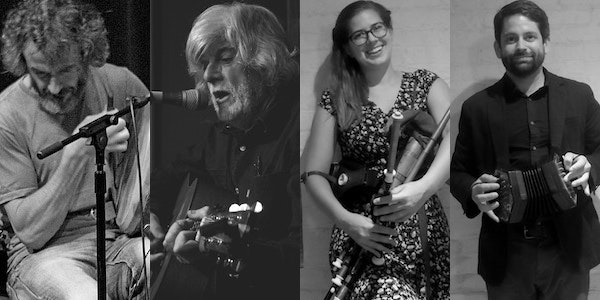